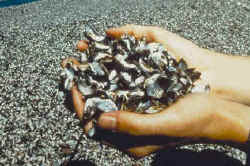 During the summer of 1998, the Great Lakes Division worked in cooperation with the Department of Biological Sciences at Oakland University to document the density of zebra mussels on shipwrecks in Green Bay, the Mackinaw Straits, and northern Lake Michigan.  The zebra mussel, like the round goby, is a foreign species introduced to the Great Lakes through

Density of the mussels on the outer surfaces of the wrecks was determined by SCUBA-certified cadets who counted mussels in a quadrant of one-quarter square meter.  Each pair of cadets counted four quadrants.  The cadets counted the mussels visually in most cases, but visibility conditions at some wrecks made it necessary to count by using their fingers to feel for the mussels.  The cadets also checked the orientation of the wreck, direction of the current, and the types of surfaces the mussels clung to.

Cadets aboard ship recorded the diving activity using an underwater robotic video camera, and prepared sketches of the wrecks based on the video images.   Upon completion of the dives, the location and density of the zebra mussels were recorded on the sketches of the shipwrecks, and survey forms and field notes were completed for review by the Oakland University researchers.